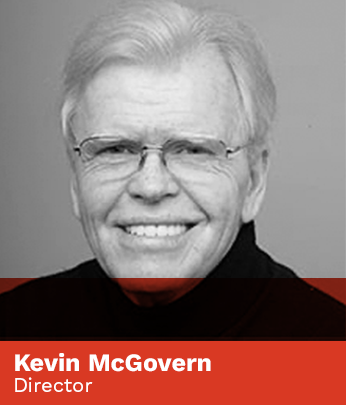 Kevin McGovern is the Chairman and CEO of McGovern Capital. Through McGovern Capital and its affiliates, he has co-founded over twenty-five (25) companies, six of which have become world/category leaders, and he has been lead negotiator/principal in over fifteen (15) global joint ventures. McGovern Capital serves as an investment, strategy and licensing participant and advisor to global businesses. He owns McGovern & Associates which provided legal counsel to certain of the largest acquisition funds in the world.

McGovern was a founder of SoBe Beverages, the fastest growing beverage company ever in the US (sold to Pepsi), and McGovern Capital was one of three owners of KX Industries, L.P., the largest manufacturer and worldwide source of carbon water purification filters, having invented and supplied PUR to P&G, the first end-of-tap filter to Brita, and the first refrigerator water filter to Electrolux. He also created the program, supervised and negotiated all licensing of Tristrata’s alpha hydroxy acid (AHA) patents, which technology was incorporated in approximately 40% of all global skin care products, and is/was sold in approximately 84 countries. Mr. McGovern has spent well over the last decade working to provide clean drinking water to people with the worst water contamination issues (including bacteria, viruses, arsenic and lead). He serves/served on many public and private boards including The Sports Authority (Exec. Committee – NYSE).

McGovern is actively involved in the medical cannabis industry with numerous companies across the globe. He is Co-Chairman of Israel Plant Sciences which has numerous subsidiaries working on uniform seed breeding for all agricultural purposes and cutting edge drug solutions for intestinal bowel disease (IBD), addictions, and colon cancer. Kanativa and Intiva BioPharma develop cannabisrelated drug and medical solutions and Intiva BioPharma (Stock: NTVA) is a leader of orphan cannabis drug development. He is a member of the Board of WeedMD, a licensed Canadian medical marijuana producer and dispenser, which has one of its specialties to provide cannabis related healthcare to the elderly.

Mr. McGovern is also known for his nanotechnology involvement, serving as co-chairman of Angstrom Publishing LLC, which together with Forbes publishes a global monthly Nanotechnology newsletter currently entitled The Forbes/Wolfe Emerging Tech Report. He is a member of the National Board of the Smithsonian (the world’s largest research and museum institution) and is a Trustee Emeritus and a Presidential Councilor (highest honor to alumnus) of Cornell University (having served as the Co-Chairman of the Technology Transfer Committee and Co- Chairman of the Sports Task Force). He was recently (April 2018) appointed to the Cornell University-wide Committee on Research and Innovation. He also teaches a course on “Global Innovation and Commercialization” at the graduate business school at Cornell University and is a guest lecturer at Cornell NY Tech, Stanford (business lecturer and executive programs), MIT, ESCP Europe, NTU in Singapore, and KAUST in Saudi Arabia. He also served as Chairman of Entrepreneurship@Cornell for over seven years. The McGovern Family Center for Venture Development in Life Sciences at Cornell University was recently acclaimed as one of the Top 10 Venture Development Centers in North America. In addition, he established the McGovern Fields at Cornell.

Mr. McGovern served on the Board of the US Pavilion at the World Expo in Shanghai and was appointed (only foreigner) to the Expo’s Post-Development Committee. He is also Vice Chairman of the Silver Shield Foundation, providing assistance to families of policemen and firemen who die in the line of duty in New York, Connecticut and New Jersey. He also serves on the Board of Point Hope providing global assistance to orphans and is an Advisor to the Child Center of New York which strengthens the skills/opportunities and provides emotional support for 26,000 low income children in New York City.

Mr. McGovern has received numerous awards including the Cornell “Entrepreneur of the Year”, St. John’s University School of Law’s “Distinguished Alumni Award” and The East West Institute’s “Global Game Changer Award”. In addition, he received the 2013 Pioneer Award from the United Nation’s International Council for Caring Communities, the Luce Foundation honored him as its 2015 Humanitarian of the Year, and he received the 2016 Gold Medal Award from the American Irish Historical Society.